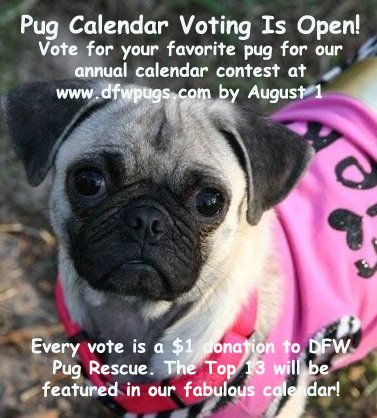 The 2010 Pug Rescue Calendar Voting Is Open!
The nation's largest pug rescue has launched its annual Calendar Contest to choose Ameria's Top Pug! Vote for your favorite pug for our the Dallas Fort Worth Pug calendar contest by August 1 at our contest site. Each vote is a $1 donation to DFW Pug Rescue, so use your paws and vote multiple times! The Top 13 pugs will be featured in our fabulous calendar and the grand prize pug who receives the most votes will be featured on the cover.

Official rules and important stuff:
Each photo submitted becomes the property of DFWPRC. Photos that are submitted cannot be professionally produced. Photos with people in them will not be considered and two photo entries are allowed per family. Pictures must be light enough, of good quality and not blurry. Pugs with less than 10 votes by July 1st, will be removed from the competition.
Posted by Unknown at 5:54 AM 6 comments: